The origin lies with the family Jos van Kempen comes from Mill (Brabant, NL). In 1979 they moved with the family van der Linden to the Dutch province “Flevopolder”. After 13 years family van der Linden decided to say goodbye to the agricultural sector and Jos decided to continue the business with his family. Over 20 years the company has been at the Ganzenweg in Zeewolde, however, the space was needed for expansion of the “Harderbroek” nature reserve. Since the year 2000 the company has been moved to the former agricultural model farm “De Kandelaar”. The dairy and agricultural farm is now run by Joris van Kempen and Marc & Mariska van Diepenbeek. They are supported by Jos & Maria van Kempen – Ronnes.

“De Kandelaar” is a name that has long been associated with the company at the Hoekwantweg. “De Kandelaar” can be seen on the potato barn and circled by a sugar beet, potato, onion and wheat. Until 1996, “De Kandelaar” has been a former research center for agriculture. An experimental farm should be observed carefully and a candle stick (een kandelaar) glows in the dark polder landscape. The light of “De Kandelaar” in the middle of flat land is visible from all angles. 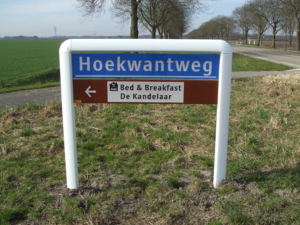 The company is located at the Hoekwantweg. Because hoekwant is the common name for fishing gear consisting of a combination of lines with hooks. The thickness of the lines and hooks depend on the species one thinks to capture. It represents a way of fishing. ‘Hoekwant’-fishing is a method where a high degree of dexterity is needed, because one must perform a number of actions whilst sailing. The fisherman casts a long line. At this line shorter lines are attached to the bait. Bringing in the catch happens energetically, therefore one needs to follow this pace. The Hoekwant consists of a long cotton line, which every 1 to 1.5 fathoms transverse lines (cables) are connected to a hook. To such a line, called a ‘slit hoekwant’ about 200 cords, of 60 cm long, are attached. Before departure, these cords are carefully arranged in a wooden box. Of course, It’s very important, that these don’t get messed up. The prepared longline will be thrown out to be picked up after a some time. The bait usually used is smelt, sometimes worms, nematodes (“kodden”) or shrimp.

De Kandelaar is not far from Meetstoel U99/100. This unique property has been used for the drainage of Flevoland. This ‘chair’ is about three meters high. It served as a reference to accurately measure the ‘new land’. There are currently nine ‘Meetstoelen’ in the province of Flevoland. This Meetstoel U99/100 is at the Biddingringweg in Biddinghuizen, near the Nonnetjesweg. Before draining the polder surveyors have assigned coordinates to enable the land to be arranged. The reference points where found in towers on the mainland. After a short walk from the Nonnetjesweg or a short bike ride from the Hoekwantweg you can take a look at this newly restored ‘Meetstoel’.

They are supported by Mariska van Diepenbeek. Most of the time Mariska is with the guests of the Bed & Breakfast. Maria van Kempen-Ronnes often helps her. Mariska worked until 2013 for over 17 years as a Technical Sales Assistant at ‘Veeservice Idac’ in Drunen. Currently she is full-time working at ‘De Kandelaar’ and consultant for Optidee.